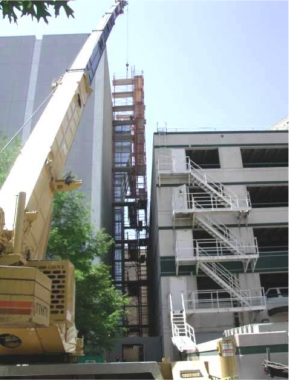 Frost & Keeling served as the Self Performing Prime Contractor for the Mission Critical HVAC renovation at the Fritz Lanham Federal Building which housed the U.S. Army Corps of Engineers Fort Worth District and GSA Region 7 Headquarters. The project consisted of replacing 21 air handling units ranging in size from 14,000 to 35,000 CFM in a 14-story occupied building. For this project, all work had to be completed between the hours of 1700 on Friday to 0700 on Monday with all HVAC in the building operational when occupants returned to work on Mondays. In addition to the new Air Handling Units, we had to replace approximately 3,540 3-way control valves and 1,770 2-way control valves in perimeter fan coil units. The new HVAC system was provided a new Direct Digital Control System which included building pressurization and ventilation demand controls and chilled water system pressure controls. On the building exterior, we installed a new 6 story outside air chase. We also installed a complete new fire alarm system within the facility. The project was completed with zero interruption to building occupants.